Squamish-based Bronwyn Hodgins has freed the 36-pitch Golden Gate 5.13a on El Capitan, which is huge send for the history books. In 2018, she became the first Canadian woman to free a route on El Cap with Freerider over five days with Jacob Cook supporting. Read Hodgins story about it here.

Hodgins grew up in Perth, Ontario, a small rural town an hour east of Ottawa, and learned to climb in England when on a university exchange. Her first time climbing outside was with the climbing club during a weekend trip to some local gritstone in early fall.

Despite never having visited the West Coast, Hodgins picked up and moved to Squamish in January 2017, where she now works as an ACMG rock climbing guide. With Golden Gate, she becomes the third woman to redpoint the climb after Hazel Findlay and Emily Harrington. We touched base with her a few days after she topped out.

How long had you wanted to free El Cap before Freerider? It’s hard for me to pin down the exact moment that idea creeped into my mind. I had the incredible opportunity to tag along on a six-day ascent of Freerider after only climbing for a couple of years, when I supported Jacob Cook and Chris Bevins in spring 2015. At that time the idea of freeing it myself seemed farfetched. Only a year and a half later however, and tonne more experience under my belt, I was back in The Valley with new ambitions. I aid-climbed The Salathe Wall (shares all but four pitches with Freerider) with Sam Nighttingale that season, with the intention of revisiting the route and seeing if it might be possible for me to free it. So I guess it was then that freeing El Cap really became a goal.

When did Golden Gate become a goal? Golden Gate set in my mind as a goal at the end of summer 2020. I was feeling strong and confident after a great summer in Squamish, and it had been a few years since I’d been in the Valley. I felt ready to take on another big goal. Golden Gate is the obvious step up from Freerider — instead of one 5.13-, it has four! I knew the crux pitches were going to be hard for me and to train for this I planned to spend the entire winter season sport climbing in St George, Utah. But even with all this planning and ambition, I still kept swaying on the goal. It felt overwhelming; maybe this was just too hard for me. In the end I had to dig deep to find the confidence to go for it.

Did you get any beta from anyone who’d freed it before? Yes! I bumped into Emily Harrington a couple of times this winter climbing near St. George. I told her that I wanted to free Golden Gate, and she was extremely helpful (and genuinely excited) to give me all the beta. We kept in touch throughout the remainder of winter and spring. Even on the wall, I would message her with questions, and she’d reply with advice and encouragement! Thanks, Emily!!!

After sport climbing in St. George all winter, what mental steps did you have to take to project a 30+ pitch big wall? Sport Climbing in St George was the perfect training for me. I had the big wall experience, I had the trad experience, but I needed to be at the top of my game to send those crimpy 5.13s up there. St George provided the perfect mental training too. Big Wall free climbing is all about efficient execution. Not only did I need to send the cruxes, I needed to send them fast and when it counted. In St George I focused on sending 5.13s in few goes, putting the pressure on to dial in the sequence and then perform.

How much fun was it hiking a 200m static to the top? 300m! Luckily my friend Taylor was up for joining me on that first sky cragging mission, so we could share the load. But it was still brutally heavy, especially when you add six gallons of water, food and gear for climbing, cooking and sleeping. After a winter of sport climbing with no approaches, Big Wall climbing was a lot of work.

What was it like projecting the upper pitches? Incredible. I just love this stuff. Trying really freaking hard with thousands of feet of air below my toes. The pitch I worked on the most was The Move pitch, a long sustained 5.12 into a short and powerful boulder problem at the top. The boulder was really hard for me. It took me three days to even figure out the move! Then on the fourth day I managed to stick the crux six times, but it still felt desperate! I didn’t know if I’d be able to execute when it really mattered, after the 5.12 climbing and on day 4 or 5 of a Big Wall…

Did you take any whippers? No big whips up there. The actual push from the ground went really well. I spent two days camped at the first crux pitch, since I hadn’t actually rehearsed a sequence prior. It’s a 13- fiercely cruxy slab boulder problem downclimb.I fell many times on that, but only small falls. After that I only fell twice. Once on The Move and once on the A5 Traverse.

Who was there to support you during the projecting and on the send? I had a variety of friends up there supporting me this spring. Taylor Woodruff, Alix Morris, Randy Ladowski, Kevin Heinrich and of course Danford Jooste who supported me on the push. Thank you to all of you,

What does it mean to be the only Canadian woman to free two El Cap routes? I hope it means that more women (Canadian or not) will get inspired to try. I look forward to seeing more and more women up there crushing on the big stone. And it’s already happening. Congrats to Brittany Gorris for sending The Salathe, and Amity and SJ for putting down the Freerider all this season.

It’s only May, you’ve freed El Cap. Now what? Now it’s time to take a breather from big personal goals and focus on the 2021 rock guiding season in Squamish. Experiences like Golden Gate are so incredibly empowering and impactful. I love guiding, as I get the opportunity to bring people into this world and show them first-hand how to experience it for themselves. I’m really excited to offer a couple of Big Wall clinics this summer too, among other programs I have lined up.

Check out some great photos of Hodgins by local photographer Nick Smith below.

We touched base with Hodgins about Golden Gate, her first El Cap wall Freerider and what’s next 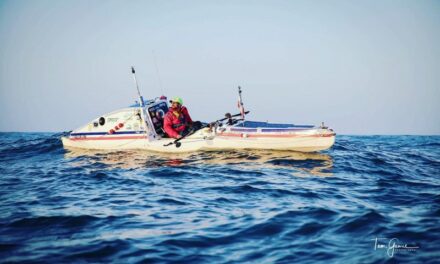